(scene: the middle of the ocean on a raft)

I'm starting to see how this all works.

The planning necessary for execution.
Multiple ideas being fashioned simultaneously.

A PLAN will lead to victory.

So we have a new remix to drop on you all.

This time around the song being remixed is "Human Ram", from our soon to be released self titled sophomore album (editors note - coming out April 17th, 2010!!!!).

Q: And who (you're certainly wondering) is it that remixed this "Song"?

This guy. One of my (and the whole band's) good buddies. 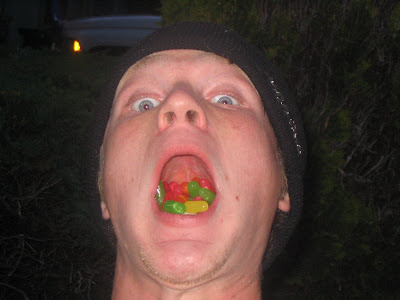 PHYZK and the BATTLEHOOCH crew go way back. PHYZK, myself (Archaeology Johnson) and Steamboat Ravis lived in a "Triple" dorm room on the 2nd floor of A building @ Porter College in UCSC.

INTERESTING FACTOID: BATTLEHOOCH's own Dr Spankk and Huberloinz also lived on this hall (as well as many many classic clowns such as the Guat, Punk Rock Chris, Smac, Annie and Heather, Bobby Rawson and a good portion of San Francisco's own sublimely freaky NEW THRILL PARADE, just to name a few.) 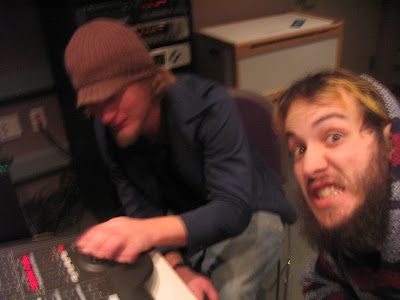 (Here we are in the UCSC Electronic Music Studio... back in the day, ya'll)


After we lived together in the dorms, we later moved into a house along with Huberloinz, Dylan (from Swanifant) and the infamous G-MAPS. The house, being on Mentel Ave., was dubbed the Mental House.

(editors note: I'm currently sifting through the HOURS AND HOURS of Mental House recordings I have - jams, shows, demos, freak outs, experiments, general madness - in effort to put together a blog post on that in the not so distant future...)

Here are a couple pictures of PHYZK hurling himself off of the couch in the living room of the Mental House. THESE ARE RAW PICTURES. NO PHOTOSHOPPING, YO. 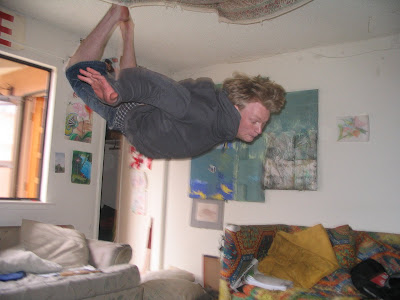 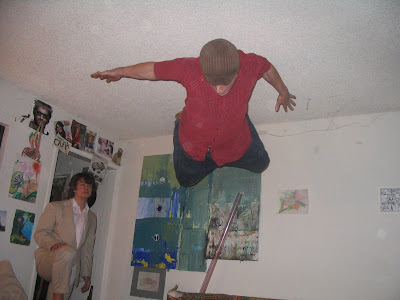 PHYZK is impressive on many levels. He plays many instruments including tabla, steel drum, congas, turn tables, and all manner of crazy auxiliary/hand percussion type doodads. He also makes FAT Beats. He was ALSO also an astrophysics major.... and word on the street was that that was the most brutal major at UCSC. Word.

Anyone that knows PHYZK was tell you that he's a daredevil (thus him constantly jumping off of our couch... the daredevil!). Be it snowboarding, mountain biking, dirt biking, or just jumping off of a really big tree stump, PHYZK always seemed to be in a hurry to throw himself off of a cliff or something.

I've made days worth of music with DJ PHYZK and spent 10 times as many days kicking it super hard with him. Getting candy at Walgreen's. Watching Mr. Show DVDs over and over.

So that's why we gave him our track to fuck with, because we knew that he'd make something EPIC.... and lo and behold he did not fail. In fact, he outdid himself.

And without further adue (the crowd: "TOO LATE!") I present... Human Ram (DJ PHYZK REMIX)

I click on the "next blog" button, right? And it's this family that's gearing up for autism week. And I think that's pretty cool.