Many Worlds Have Come Since I First Left Home (BATTLEHOOCH U.S. Tour 2010 Part 5) 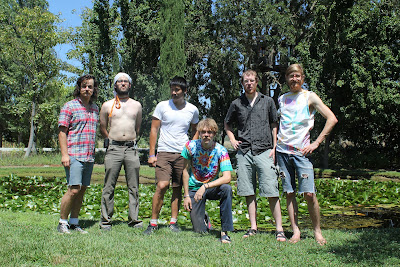 A MOTHER Post!
(as in "don't turn it loose, cause it's a MOTHER!" as my man James Brown says)

So much activity recently. (you always say that, lame-o)

Right now, we couldn't be any more in the South, boys and girls. Yes, we are knuckle deep in the bible belt.... visited so many states that until now have existed only in abstract forms in my mind (Mississippi, Louisiana, Alabama, Florida, North Carolina, Georgia, ETC!) Learning so much about this country... people... stereotypes... weirdness...

The spectre of religious madness and corrupt asshole police are always around, yet they have yet to interfere with the tour (knock on wood).

All this southern livin' is funny cause all the vlog posts I'm about to put up/talk about are from events from a month ago.... When we were still on the west coast (awww, the beautiful west, how I miss thee). 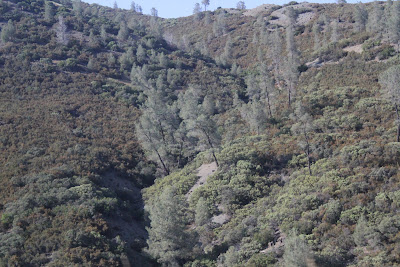 You wouldn't believe how hard it's been for yr humble blog wrangler to find a decent Internet connection to upload these videos, let alone write this very blog post. Quite difficult.... (oh, 1st world problems....) so, sorry for the lag since last post... (you always say that, lame-o)

Last time I posted, it was to tell tales of adventure in Portland, OR. The next 3 vlogs track our journey back home to SF and down to LA before we left the west coast and embarked on the guts of the tour. (We are NOW in the guts)


We were only in Eugene for a little over 36 hours but it couldn't have been more action packed. We rolled into town on the late night tip and shacked up with our friend of a friend of a friend of a GIRLfriend, the lovely Francesca McCormick (what a babe). Being that we arrived very late, I chose to turn in while the rest of the boys went out to check out the town. I brushed my teeth, put on my jammies, whipped out the sleeping bag and pillow and literally had just closed my eyes when RRRRRRRRRRRRRRING my celly starts blowin' up. Wouldn't ya know it, it was the other battleboys with an important message! Apparently, the downtown area of Eugene was absolutely CRACKIN and the word was that we would be damn fools to not street perform. Next thing i knew (literally), I was standing on a street corner amidst a plethora of drunkards, piecechows and foxy ladies. We started our first song some time after 2:15am. Cars kept driving past and each time I was sure that it was a cop car coming to shut us down and throw us into the brig..... yet, it never happened (!!!!!!). As the set progressed, the whole downtown scene basically turned into a ridiculous dance party: bumpin, grindin, pop lockin, and there was even Russian dancing at one point! Tripped out weirdos headbanging! Boobies being flashed! Sexy glances this way and that.... it was literally insane. When we busted out our trusty cover of "billie jean", things just went OFF. It was literally a night I will never forget... so glad I didn't demand to be left alone so I could sleep. Episode 4 is a highlight reel (of sorts) from this event. The show was so hot, you must be careful that your youtube doesn't blow up. (okay, Archaeology Johnson... calm down, yo) 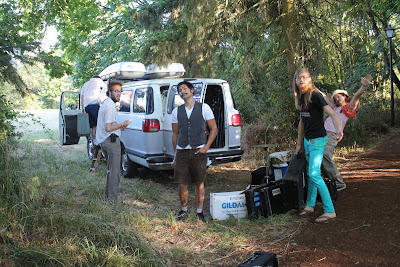 After a failed attempt at trying to street perform outside of a Ringo Starr concert (closest I've ever been to a Beatle, yo.) and a show with our good friends Dirty Wink (not to mention the most splendid night of romantic gallivanting I've had in recent memory... word up Allison, :) :) :)), we bid farewell to Eugene and started making our way back down the west coast. Before getting to SF we stopped off at the Solar Living Institute in Hopland, CA. Our drummer, Hubaloinz, went to SLI for a spell after he graduated from UCSC. He lived in a little trailer for a few months and learned the nitty gritty about green energy, climate change, etc. and so forth. (FUN FACT: It was here that he got the initial idea for our trusty battery bank.) Since we were more or less going to be going right past SLI on our way back to SF, we decided to stop off there and get some upgrades done to the battery bank. 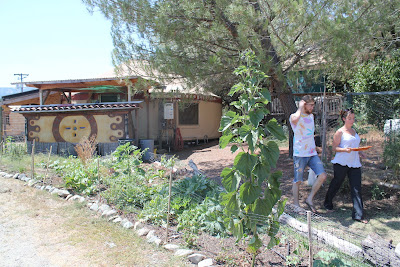 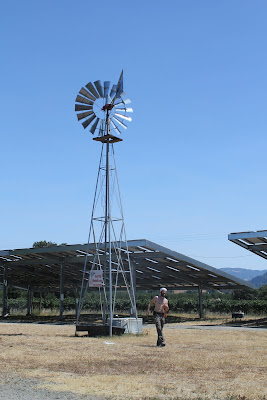 Episode 5 has Hubaloinz explaining a little bit about the battery bank, Grant giving you a luxurious tour of the premisses of SLI and as an added bonus some footage of nearby Clearlake... which, in a word, is really FILTHY. (Like, FILLLLLLLLLLLLTHY.) Also, Pat slept in a house made of hay that night. The rest of us slept in a yurt. A good time was had by all. Don't use plastic. Long live the Sun. 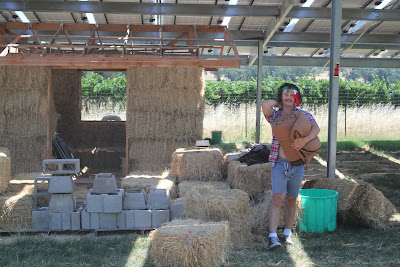 The 2 or so weeks that we spent up north were textbook examples of perfect weather. Delightful breezes, comfy warm temps, blue skies, etc. and so forth. Utterly perfect, yo. So it was certainly a shock to come upon the Golden Gate bridge and see how completely smothered in fog our beautiful city by the bay was. It just looked like a huge, cloud shaped fat guy was sitting on the whole city... and it was COLD!!!! For the majority of our time up north I was wearing shorts and a tank top, yet as soon as I got to SF out came the sweatshirt and the knit cap. (love this town, no matter what) That night we played a "secret" show of sorts at one of the best sounding rooms in the city, the Rickshaw Stop. It was a mellow affair with some close friends, but damn good fun none the less. We shared the bill with New York's absolutely radiant Setting Sun and Quitzow (which is actually the same people in both bands, but don't tell anyone).
This show was also noteworthy because it marked the beginning of THE GABE LEG. THE GABE LEG was/is the section of tour where we had our invaluable sound engineer Gabe Armstrong joining us for the adventure, making sure we sound GOOD and STUFF.

After the show, we went back to the Battlepad for an after party with the homies. Now, the Battlepad is certainly still our home, but while we're gone on this 4 month adventure we have a bunch of people subletting. We may have only been gone for 2 weeks but the place was already VERY different looking once we came back.... Yet, it was still very clearly the same Battlepad. It reminded me of those dreams that you have when you go back to an old house from your past/childhood and you can tell it's the same place, but everything is moved around and a little off.... was a little bit trippy, if you ask me.
It was so nice to see our homies one last time, have a day off sitting on the couch watching tv (On Demand)... seriously love the BATTLEPAD... Clips from the Rickshaw Stop show and some of the after party are in part 1 of Episode 6.

...but we weren't meant to stay in SF for too long... the road beckoned. We got down to LA and played a show in a guitar shop in Venice, CA. This, unfortunately, was the first BAD show of the tour. Not so much that we played bad but I think pretty much everyone was bummed out during the show. The fellow (or should I say FUCKTARD) who owned the guitar shop refused to let Gabe do our sound, took fucking forever to set up the mics, didn't listen to our requests for what should be mic'd and then proceeded to a REALLY shitty job of mixing our band. UGH, he was just a smarmy little bastard of a man and totally took the wind out of our sales. Also, Ben's keyboard completely crapped out right before the show, which he was not too pleased with (in fact, this couldn't be more perfectly illustrated than the look on ben's face during the footage from Time Warp music in Episode 6. LOOK AT HOW FRUSTRATED THAT MAN IS!!!!! AHHHHHHH!!). The funny thing is that two separate videos of us playing that show wound up on Youtube within days of the show. Oh well.... so much for putting the best foot forward.
That night we fit a good chunk of the band into our friend Amelia's TINY little studio apartment (gabe and I slept in the battlevan)... probably the smallest place we've fit the band for a night sleep, yet. The next morning we were chilling hard and Gabe shot a video of me being super EMO and playing classical guitar improvs on a fire escape... (Gabe wanted the video to look French.... does it look French?)


Luckily, the next day's shows fared much better. First, we played a really fun street performing style show in the upstairs loft of Origami Vinyl in Echo Park and then we played a concert at the Hobbie Shop recording studio in Highland Park. Our set from the Hobbie Shop was also recorded on a 16 track mixing board and run through a bunch of sweet (sweet) analog gear. We are currently working at putting together the footage and recordings from this show for inclusion in later battleblogs... However, our musical abilities sadly don't translate over to competence with film editing software, so it's taking longer than expected. (EXCUSES EXCUSES.) Snippets from the LA shows are in Part 2 of Episode 6. (Seriously, yo. Check out ben's scowl. So HARD.)

You know the drill at this point. We're trying to crank this stuff out as fast as we can... thanks for reading... love ya'll.

If only you could hear the bugs in the Athens, GA night..... so lovely
Posted by Battlehooch at 12:32 AM