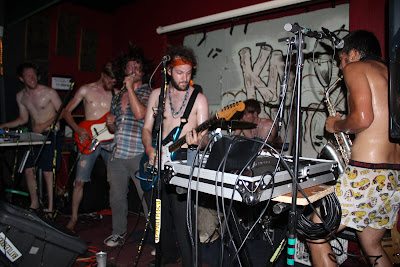 MAD PRODUCTIVE.
(Setting records, boys and girls. 2 blog posts in (almost) one week.)
(Archaeology Johnson pats himself on the back)
Time for Tour Vlog Episode #3!!!
(Is the word "Vlog" lame? I think it's kinda funny... sounds like the name of a Russian butcher...)

As I'm writing this I realize that it's only been 2 weeks since the events captured in this VLOG/Post have happened. A short amount of time, yet the past few weeks have been so dense with adventures that I'm wondering if I can recall it all... EH! Lets just give it the ol' college try... 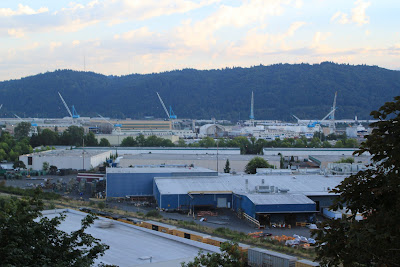 Episode #3 finds the Battlehooch crew returning to the beautiful and ideal city of Portland, Oregon after our successful jaunt in Washington state. We were in Portland for longer than we were in Washington so in turn the Vlog itself is a little bit longer. (Lots and lots of good stuff). The first cut of this episode was approximately twice as long as it is now... I had to cut a bunch of videos of various performances and different Piecechows and what not... leaving in just the cream of the crop.

SOME POINTS OF INTEREST!
(or NOTES ABOUT SOME OF THE LIVE SHOWS WE PLAYED, as seen in Video Blog #3:)

• Portland State University South Art Blocks - This time around to Portland marked our 3rd time playing on the outdoor stage in the South Art Blocks of Portland State University. This tree flanked and utterly splendid stage has become a highlight of our northwest journeys. The clip of us playing "Fishmilk" is from this show. Another reason why we love gigs at PSU is because we get to hang out with our friends from the SOUND HOUSE. 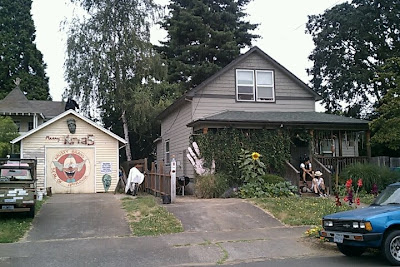 Our relationship with the SOUND HOUSE started a couple of years ago when we met a fellow named Joel in SF. He came upon us while we were street performing and we became fast friends. He worked for PSU and invited us to come up and play there next time that we were in Portland. We took him up on his offer and thus started a great partnership. Assisting Joel with the sound at our PSU shows are his good friends/house mates. This crew of gentlemen are all well versed in the ways of live sound (thus their house being called the SOUND HOUSE) as well as the subtle art of allowing Battlehooch to sleep on their floors/couches. On this tour we spent a solid chunk of time hanging out on their porch, shooting the bull and checking out the many trinkets that hung from the overhangs. 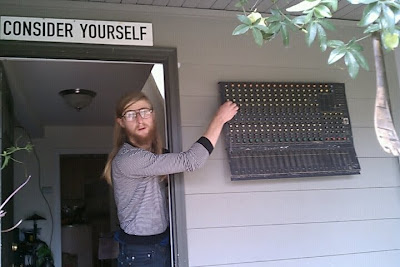 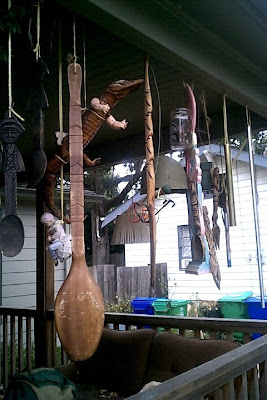 You can see us all hanging out by the BBQ in the Vlog. Exciting. Their neighbor Jim is a whole other story. His house is the one above that has the "Krusty The Klown" face painted on the garage door. We'll save an in depth look at Jim for another time... Probably it's own special blog/vlog combo... He'll blow yr mind.....
(SLIGHT TANGENT ALERT!) Another particularly funny thing about this recent PSU gig was the fact that in a nearby building a convention was being held for the association of medical illustrators. More importantly though, they had a BIG FAT BUFFET. (contextual note: In order to make ends meet on tour, each member is trying to live off of $100 a week for all our food/random expenses. In other words, we're often hungry.) So, most of the band decided to head in and mingle with the crowd... and grab some snacks.... this little (mis)adventure can also be found in the newest Vlog. Utterly Classic.
• "PDX Pop Now" Guerrila Show - 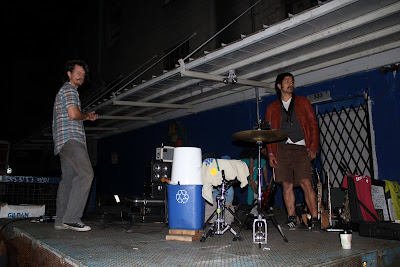 At the same time that we were rolling through Portland, the PDX Pop Now festival was revving up. The festival is a groovy annual soiree with all manner of bands playing at some outdoor stages in downtown PDX. We rolled up looking for an opportunity to set up and do some street performing but the vibe didn't quite seem right.... we didn't want to ENCROACH, dig? We were getting ready to head home when we bumped into the fellow who had booked us earlier in the week at Portland's own Mudai Lounge. It turns out he (THE BOOKER) also did some booking (BOOKING) for the festival (!!!!!!). We asked him what he thought about us setting up our street performing gear in between bands. He gave us the go-ahead. We made haste and set up on a loading dock behind one of the stages and played a quick 5 song set for a group of a few hundred people. A snippet of the (unfortunately poorly lit) show is also in this Vlog.
• Alberta Street Fair/Saturday Market - In Portland, on the last Thursday of every month there's a fatty art crawl/street fair on Alberta street. The scene is truly something to see: quirky folks selling their home made wares, street bands abound (Editors Note: Portland truly is the land of Street Performers. So many street bands, yo), and tons and tons of people looking for something to catch their eye. 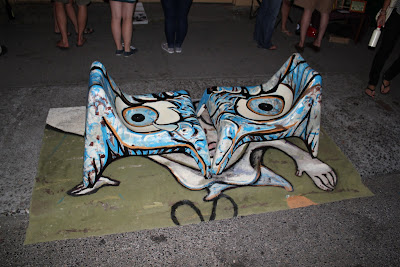 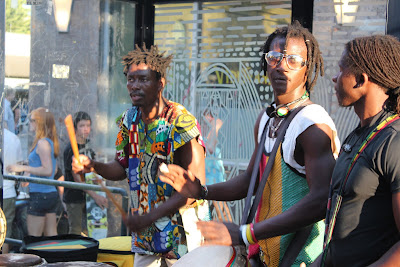 We found a cool little spot amidst all of this and set up our gear. Shortly before we got started, we were approached by a group of "breakdancers". These "breakdancers" informed us that they were going to be setting up their "breakdancing" station in close proximity to us and, in all likely hood, drown us out with their P.A. system. We figured we'd give it a go anyways and started doing our thang. The set started well, we got a crowd going... you can see a fragment of a version of "Red Tide" from this performance in the Vlog. However, right at the end of "Red Tide" the "breakdancers" started "breakdancing" and basically totally took away out crowd. We were all but ignored from then onward. We were pretty damn super pissed yo. HOWEVER, a few days later we came across these same "breakdancers" at the Saturday Market. Like Alberta Street, the Saturday Market had a bunch of really wild street performers, crafts and other madness (Note: dig the 10 piece gypsy/pirate/punk band and blues guitarist who had a stump for an arm in the Vlog #3 ). 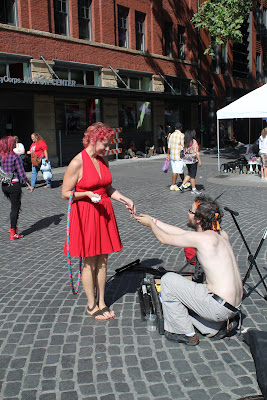 Also like Alberta Street, we came to the market to do our street performing set... but the "breakdancers" were already setting up their stuff near where we had signed up to play. But we had learned our lesson the last time we dealt with the "breakdancers", so instead of getting out the busking set up, we pulled out the FULL set up. Big amps and everything. (I've mentioned/included a video of us playing at the Market in a past blog post, but you can also just check it out here.) This time we were the ones that did the crowd steeling. 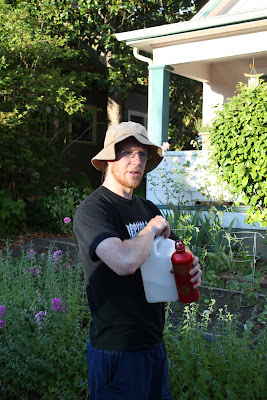 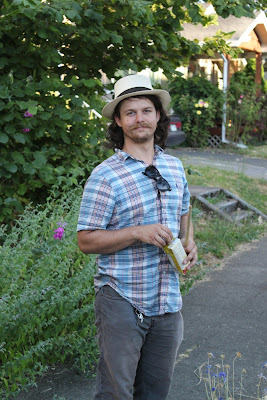 (Look at these Thugs..... LOOK AT THEM!!!!!!)
• Fireworks Pizza (in Corvallis, OR) - this show is sure to go down in the BATTLEHOOCH LORE OF MEMORABLE SHOWS. After having a rip roaring good time in Portland, we cast off and headed south a little ways to play a show at Fireworks Pizza in cozy Corvallis. This was a sit down restaurant, boys and girls. Quiet, mellow and far from the type of places that we normally play (insane street corners, sweaty bars, tripped out hippie parties, the like...). On the posters that advertised our gig we were billed as "Folk Rock from San Francisco".

So we set up our quiet street performing set up (so as not to blast away the dinner patrons like we would with the big amps) and started in with "I'll Crawl Into Your Mouth", a new jam and one of our mellowest, quietest songs. Shortly after we finish it, the waitress comes up and says something along the lines of "you guys are a little loud, can you turn down a little bit?" This left the band a bit freaked out. We were supposed to play for 2 hours, but our quietest song was already too overbearing.... WHAT TO DO!?! So what did we do? Well, we did what any shape shifting orchestral rock band would do... we shifted shape. We took all our nutty ass material and just went ahead and played it smooth and mellow. Like Hall and Oates does the complete BATTLEHOOCH songbook (except "Fishmilk", I don't think I can even fathom what a smooth version of that would entail). If this is too hard to imagine, just check out the clip at the end of Vlog. Yes that is "Human Ram", yes Pat is crooning and yes a few feet away families were eating Pizza. 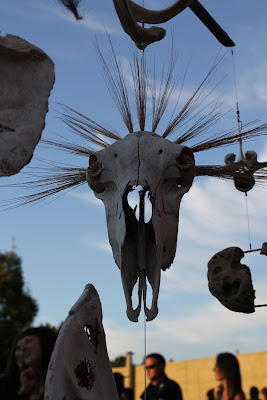 So much of the touring adventure falls through the cracks of my story telling.... the NBA JAM battles, the silliness during the HOURS and HOURS of driving we do, visiting Ben's cousin Asher and his epic band called "My Dads", the sheer joy of being able to sleep in a real bed for a few days when we stayed with "My Dads", the PDX food carts, visits with our good friends Jeff Green and Nate Goldman, "The Mist", the list goes on and on...
Yet, I suppose that's just the way it is... I mean, as I write this, I'm in an Executive Inn in Amarillo Texas, and only last night was I dancing with a belly dancer, slamming free pineapple juice, watching people willfully electrocute themselves and hearing the murmur of a shitty biker blues band butcher "Roadhouse Blues" in close proximity.

Hopefully you can kinda get a sense of what it is that we're going through out here in Weird Ol' America... A Weirdness that only gets more elaborate and all consuming with each day and each new experience....

I'm Out. But just for a bit.
P.S. - we found Ryan's soul mate... or at least the residual echoes of their great explosion.... or something like that.... 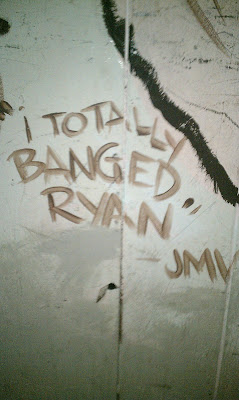 it looks like that message on the wall at the know was written in blood. big ups hyoobaloinz.
-nate