WELCOME TO THE MOTOR CITY. 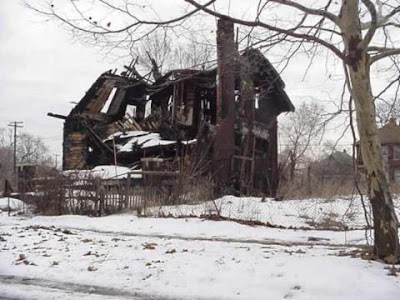 (THE REALNESS) Out of all the places we visited on the 2010 Desolation Tour, Detroit sticks out as being the most Desolate place we visited... except for maybe that 12 hour drive from Austin, TX to Las Crucas, NM... there is literally NOTHING out there.

(Far as I can tell) Detroit is essentially the ghost town of America. One day while we were staying there, I took a cursory look around the neighborhood and realized that AT LEAST 80% of the nearby buildings were condemned. FACT: the population of Detroit has gone down from 2 million to 900,000 in the past 20 years. MARINATE ON THAT, YO.

It never occurred to me that places like Detroit exist in America.

America is supposed to be the land of prosperity.... Yet Detroit is literally crumbling at this very moment. We shot a desolation video there in an abandoned car factory... whole floors had collapsed.... there was graffiti and broken widows everywhere... tons of piles of JUNK and CRAP. Spooky as all hell. Don't even get me started on what the downtown area reminded me of....


(PRODUCTION NOTE: This particular desolation shoot was cut short because we got spooked by all the homeless people that were lurking around the car factory, eyeing our expensive gear and our scrawniness... far from "police protection"... that's why that particular video is a little more on the raw side... cause it was MORE RAW. RAW-ER. RAAAAAAAAAAAAWR. (P.S.) - They were filming Transformers 3 nearby. No joke.)

The people I saw walking on the streets of Detroit looked SO HARD.... as if their bones were made out of steel. COLD SKELETONS.

(Audience Member: "WELL AIN'T THAT A LOT OF POO TALK ABOUT DETROIT!")

SORRY. sorry. You are correct. No need to dwell on how messed up Detroit is... because Detroit is also TOTALLY GREAT! Don't believe me? Watch the #15 VLOG and you'll SEE that we had a great time...

SERIOUSLY. We had a $%#^@ (Hi Ryan!!) great time in Detroit. Hung out with our booking agent Kim Paris, visited the original Motown studios, etc. and so forth... good times. We found this excellent street fair called the DALLY IN THE ALLEY and got in some much needed (musically, spiritually and financially) street performing. Lots of new friends. Even though the city seemed kinda dour and down in the dumps, there was still lots of friendly smiles and dancing feet to be found.

Good vibes from the people of Detroit.

So peep the VLOG, dig the latest Desolation Video and enjoy a collection of some of the band's favorite jams that came from the Motor City:

Stevie Wonder - "I Was Made To Love Her"
(There are simply too many Motown songs we love so I just picked this one cause its... well... you know... just listen....)

Iggy Pop/The Stooges - "Penetration"
(FUN FACT. We played this song at the very first ever BATTLEHOOCH show. Were YOU there?)

DJ Assault - "Yo Relatives"
(DJ Assault is a genius. The end.)

13 years and 6 amazing albums (seriously, not one of their albums if close to bad... all awesome in their own way).

No one died so I'll spare you a long winded rant about the White Stripes and how important they are to me a la my homage to Captain Beefheart (Audience member: "THANKS!"). Bottom line, I thought they were the bees knees and Jack White is easily one of my very very favorite songwriters and guitar players. I was lucky enough to see em live a couple of times (on the Elephant tour. boom.) and it really did feel like I was seeing one of the GREATS. Ya, know. They were HUGE. Titans. Giants. My favorite memory of seeing them live was when they busted out a medley of "Lets Shake Hands", Bob Dylan's "Isis" and the Yeah Yeah Yeah's "Man". It was REALLY exciting. So stoked I got to see the epicness that was their cover of Death Letter Blues LIVE!!! Just two people laying it down HEAVY and I could've listened to it for hours.

Anywho. LOVE THEM. And really.. kinda glad they stopped when they did. That way, they'll have never released a bad album... goin' out on top. What a career.

Here is a small hand full of some of my favorite White Stripes songs (songs, not VIDEOS, even though pretty much ALL their videos are epic...)

I'M SLOWLY TURNING INTO YOU

Posted by Battlehooch at 5:51 PM