I'm currently in the "Old Man" (Official Title of BATTLEVAN 2.0).

Remember in the last post when I was lamenting technologies lack of dependability... and the general frustration it (Technology) had dispensed on me?

Well enough of that boys and girls, I'm hear to sing the praises of the 21st century and it's numerous technological marvels.

My Computer is working fine. (knock on wood)
I'm writing this blog in the van.
While it's driving.
Around these parts we call that AWESOME.

(QUICK, COOL STORY ALERT!)
We are speeding along into the night (9:01pm Mountain Time @ The Moment), and plan on staying in Moab, Utah for a couple days. We just stopped at an In and Out Burger and much to my delight and surprise, one of my favorite new songwriters, Avi Buffalo, was there as well. If you don't know who Avi Buffalo is, DIG this song. I LOVE THIS SONG.

Very pleased with the fact that he owns all our albums now. Nicest fellow too. It was almost like he was more excited to meet us, they we were him. Looking forward to jamming with him in the near future.

So, here's the FULL SEATTLE BLOG POST (with notes)

First off, if you haven't seen it, here's Episode 2 of the Vlog.


The first week of the Desolation Tour made us a bit worried. While we certainly enjoyed ourselves, played some great shows, made new friends and managed to save lots on food costs by cooking at friends/family houses, we also barely made any money. While the experiences certainly make the journey worthwhile, we also understand the reality that we need a certain amount of money in order to make a journey of this length sustainable. So, as we rolled into Washington state we had serious fund raising on our minds...

AND wouldn't ya know it, brothers and sisters, everything turned around in the most wonderful way.

First off, we went and visited Tom's sister Joanna in Olympia. This visit was extra special because Tom's Dad and Grandma were also visiting when we were there. You can see G'ma killing everyone at Gin Rummy in VLOG #2. We played a quirky show in the hallway of a practice space in downtown Oly... good times for sure, but like the previous gigs didn't lead to crucially needed funds. We also filmed our second Desolation Show in the forests around Jo's house.... (still editing it though... keep an eye out...)

But then things started to really turn around with our show at The Black Lodge.

For those who don't know, The Black Lodge is an awesome live/work space in Seattle. Super colorful psychedelic walls and is inhabited by a crew of some of the coolest chaps around . Twas our 3rd time playing there... probably our (MY) favorite Pacific Northwest venue. We played with our old friends GOD and they sounded great. Stoked. Good night of music AND we started to chip away at the deficit.

Dig some of these pictures. Feel the Vibe. 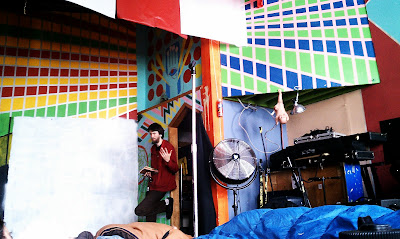 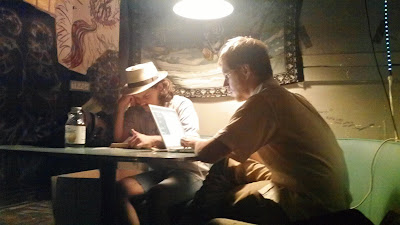 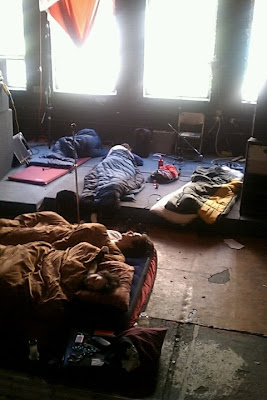 Feelin' good, we went off and sought to street perform in close proximity to the Capitol Hill Block Party. The Block Party is basically a couple of downtown blocks set aside for HIP concerts by HIP bands. We set up near one of the entrances of said Block Party and played for a few hours.

And I say without hyperbole that it wasthe most successful day of street performing we've EVER had.

It was just completely fucking ridiculous. No other way to state it. Lets just say that with that one day of playing pulled the tour/band out of the red (financially speaking). The whole evening culminated with an impromptu concert in a park, where we had a deliriously raucous dance throw down with a whole gaggle of new friends. Scenes from this are also in Vlog #2.

After the gig we were elated but exhausted. We planned on just heading back to the place we were staying and then calling it a night.
OH NO SIR. Before we new it, a bunch of our new friends hopped right into our van and demanded that we drive to the beach. So, about 12-13 people deep, we rolled out to Madison Beach at Lake Washington.
Appropriately, the band and our new friends went for a night swim. We swam out to a diving board in the middle of the lake. 20 feet high. No clouds. Full moon. Everyone took a jump. Twas absolutely amazing.

We did a little more street performing the following day, and we managed to capture a video of us doing "Piecechow"-era track, "Looks You Can't See".

We wrapped up our weekend with a brief set in a coffee shop and then headed back down to Olympia for a day off.

We were literally elated for days afterwards. Where we had been apprehensive and nervous before coming to Seattle/Olympia, we were now filled with supreme confidence and excitement! Thanks Washington State!

That's it for this edition of the blog, ya'll. But I promise more good stuff happens in the next episodes... Wait till you see the footage from our second trip to Portland.

Love you. See ya when I see ya.

(Bonus Bonus Bonus Bonus Bonus!!!!)
This one fellow really dug our set and then came up and asked if he could play Ryan's drum set. Normally, we don't let people play the set because most people who ask are morons who either hit too hard and/or don't know how to play at all. But I had a feeling about this dude. So we let him play. I think the video speaks for itself. Peace.