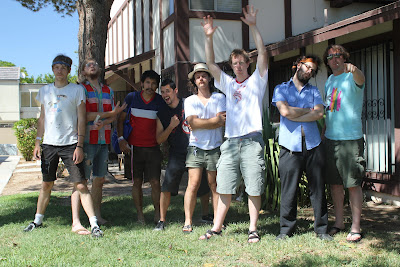 ...this whole "being away from California" thing.

Archaeology Johnson (Moi) is born and raised in California, dear readers. The longest I've been away from Cali was back in fall of 2007 when I traveled around Europe for 3 and a half weeks with my good friend Sofia Bell (who currently plays in the truly mind boggling Little Teeth). I've done some domestic traveling too. Always short jaunts, and mostly just visiting the kin in the east coast and occasional Nevada and New Mexico jaunts...

YES SIR, until this past July vast swaths of this fine fine country had remained unexplored/inexperienced by your humble Blog wrangler (Archaeology Johnson... moi).... and really pretty much the whole band (in various degrees).

All previous vlogs covered our last days on the West Coast (the west is the best) so all ensuing posts document the band's journey into new and wild frontier... ...seeing new parts of the country that we've never visited before. New experiences and adventures coming at us everyday.

(The last time I woke up in California was on my blow up mattress on the outside deck of the apartment inhabited by the band's good friends Sasha and John Paul (who play in the marvelous band "The Hot Moon")... It was a beautiful day (Of course. Ya gotta love San Diego in the summer, yo)... not too far from the ocean that you couldn't smell some salt... we had a delicious breakfast of homemade tacos and then gorged on free (FREE!!!!!!) gelato before saying good by to our sweet, sweet home.... good bye for Months..... AND Months.... AND Months...)

So now that I've rambled on (briefly) in a hyperbolic (superdupercrazylooper....) manner... here's some footage of us being stupid in Las Vegas.

(Gambling. Dancing to FUNKY MUSIC. Playing some jams in a sleak bar. Gambling.)

Vegas is enjoyable. Had some good times in Vegas every time I've gone. (Ya'll seen the Beatles Cirque de Soleil show? In a word... sakdfjyasdbfascjsydnsdfkjsfabsmdfas!!!!!!!! <------- TONGUES) Vegas is SUPER FAKE though. Not that that's even really a bad thing... more like it's kinda amazing. Like, Las Vegas shouldn't be where it is. It's in the middle of the Desert. There's no water. And yet through Sinatra, mobsters, vice and light bulbs it's become THE GODLESS MECCA OF SIN (or something.) A place to go for FUN FUN. A place to go to act like a FUCKING ANIMAL. I've always liked it. I've been there 4 times since I've been of proper Vegas age... and every time it mystifies me in some new way. Always looking for tangible soul in THE GODLESS MECCA OF SIN... always feel like I'm getting close BUT I still haven't found what I'm looking for... (hey, maybe that's why U2 filmed their video in Vegas... cosmic?(?).....)

So there ya go. As an added bonus I've added some super BOSS photos of us playing Frisbee and just looking HARD at a Nevada truck stop. If you've watched our vlog posts from this tour, you've probably noticed that we do a good amount of Frisbee playing. We're getting super good, yo. Getting dangerously good actually. Thinking about leaving behind this whole MUSIC thing and trying to make our money on the road hussling pick up games of DISC. We cannot be stopped. 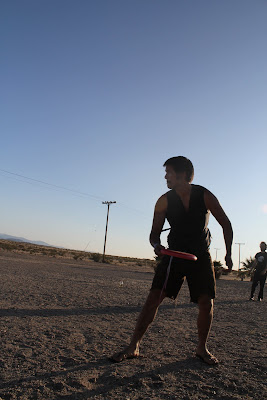 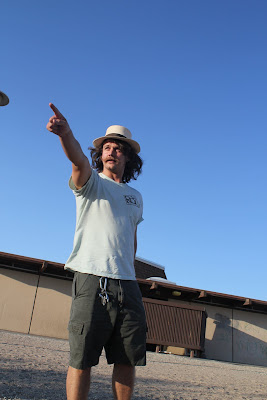 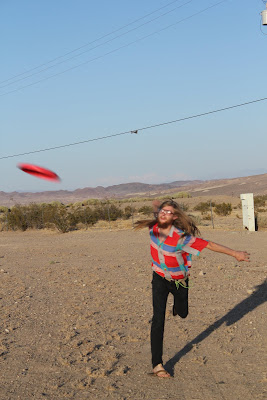 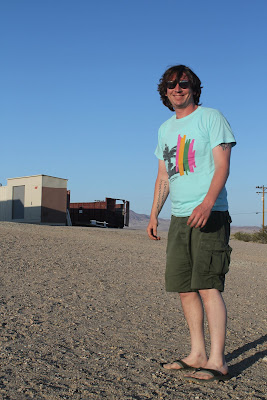 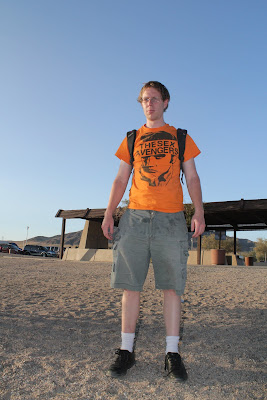 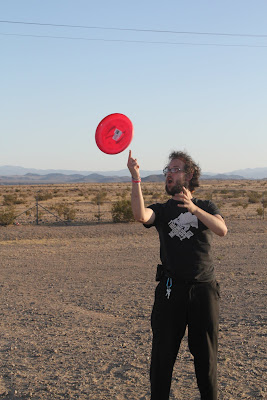 (We're currently in Detroit Rock City, listening to Loretta Lynn, eating tamales and hanging out with the ever so charming Kim Paris, otherwise known as the booking agent for our Midwest/South/East Coast dates on the tour. She's groovy groovy groovy, to say the least)
Posted by Battlehooch at 9:04 PM