HELLO! Look At This! A new post in under 2 weeks. We're Setting records.
Thus is the nature of BATTLEBLOG 3.0!

There's a town called Aptos in California. Here, I'll Prove it to you. Aptos is about a 2 hour drive from SF AND it is where I (Archaeology Johnson) grew up.

Sleepy beach town. Lots of Trees and Fog. Approximately something like 8-9 Pizza joints. An old rotting WWII battleship sitting at the end of a wharf. Utterly mellow. Deliciously wonderful.
(MEMORIES, YO.)

I went to Aptos High School.

Here's a picture of me on a typical day hanging out with my friends during lunch. 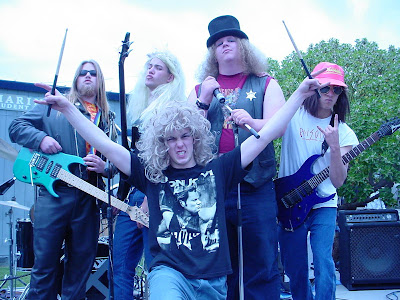 One of my friends at AHS was Tyler MacCauley. When I was first getting into "indie rock" (most of high school was spent listening to Jam Bands... I know I know I know...) or whatever you'd call it, I used to get together with Tyler (and our good buddies Dan Merrill and "Chuck" Fenster) and do our best to stumble through playing all of "Is This It" by The Strokes. (LOVE that album, don't give a fuck what anyone says).

After AHS, Tyler and I have continued to be friends. It's the kind of bond that only two total music dorks who love talking about music can forge.

Tyler went to UC Berkeley and I went to UC Santa Cruz (and met my brothers).

Tyler and I stayed in touch throughout college and whenever possible our bands played together.
At this point (January 2010) we've done tons of shows together... we're serious bros. (MY CHEMICAL BROMANCE: The Battlehooch/Tempo No Tempo Incident - coming to paperback in March 2090)
Together, we've played in barns, fat clubs, coffee shops, co-ops, more barns... there have been multiple shows where we merged both our bands together into a super behemoth of FUNK (Think Power Rangers or Captain Planet). Once, we even did a show with Tempo No Tempo where we covered each others songs.

....we took 5 of their songs, chopped them up and put them back together.

The latest development in this bromance is truly exciting!

Cool, yes? I sure think so. This remix was actually done a couple years ago, but we never had a good opportunity to show it off. It seemed that with the new attention being paid to the blog and the fact that the new DISKO version of "Quiet" has been standard in our recent sets, it seemed like the perfect time to bust out this little nugget of wonder.


Thanx again Tyler/Tempo No Tempo!!!!
Posted by Battlehooch at 2:28 PM